What are your memories of your first ever gig?

The first gig I ever did was at my primary school Christmas party when I was 9, but I assume that you mean the first Vice Squad gig. It was at Bristol University and I didn’t know that we were playing until I got there. We’d had 3 rehearsal’s in the bassist’s parents’ garage so I was extremely nervous. I got pissed on 2 halves of lager and managed to get through our set and experienced a huge adrenaline rush, and we actually got an offer to record a track for a compilation album that night.
I was 14 and the hero at school the next day.

What’s the craziest show Vice Squad have ever played and why?

It’s hard to pinpoint the craziest of the craziest but a couple spring to mind: CBGBs in the early two thousands when we had a stage invasion and the stage nearly broke because of everybody jumping up and down, I had a virus and had no voice AT ALL, so had no way of controlling the crowd.There was a show in Barcelona where they made counterfeit tickets and the audience, which seemed to be mostly made up of 13 year old boys, ripped all the monitors off the stage and passed them back over the heads of the crowd. It was ridiculously hot and the sound deteriorated somewhat due to the audience dismembering the PA. I think there was a minimum age of 18 to get in, hence the forged tickets for younger people.

The 80s gigs were nastier because of one thing: gobbing. Until you’ve taken a face full of gob you haven’t really paid your dues. It was utterly disgusting. There was also a lot more violence at gigs back then, mainly because the venues were full of pissed up under age drinkers. Nowadays you have mixed age groups, often older people bring their teenage kids and the kids are the sensible ones who keep their parents on the straight and narrow. It was more tribal in the 80s, people seem more unified now. 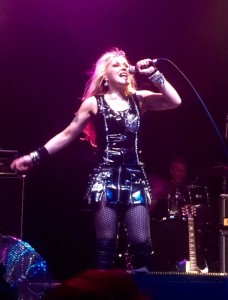 How was the gig in Colombia and playing on national TV out there?

It was amazing but somewhat stressful. Our guitarist Paul hates flying so his doctor prescribed Diazepam for his nerves but failed to mention that you can’t drink on it. On the day of the flight Paul was in the airport bar at 8am and continued drinking on the 8 hour flight to Miami. He was held up at US customs and nearly missed the connecting flight to Medellin, at one point I thought we’d be playing the gig as a 3 piece.
We did various interviews for TV which was quite weird as we were used to being ignored in the UK so found the Colombians’ interest in us rather strange but very flattering.

We did a secret press conference and were escorted by police with hand guns into the theatre and we were amazed that it was packed full of people wanting to see us. It was like a surreal version of a chat show with the audience made up of Punks. There were more people at the press conference than at some of the gigs we played in England.
The people we met were awesome and it was very,very humbling to learn that our first album had inspired so many of them to get into Punk, some had even built their own guitars, now that’s DIY! There is a lot of poverty in Colombia so Punk is a lifeline for many people, you couldn’t over estimate it’s importance.
We looked round a toy shop in a shopping centre and all the staff knew who we were because we’d been on TV, so we had to pose for photos.
We also did the ’sightseeing tour’, you have to do it because the mayor arranges it specially for the visiting bands, so there we were at the back of the bus with a Polish metal band like naughty school kids . We visited the university and met some of the students and the whole day was filmed and televised, we were even filmed when we were eating. We’d never done so much promo before and were relieved to get back to the hotel thinking we would get a break from the cameras, but there was another TV presenter with cameras waiting for us in reception!

The gig itself was amazing, we head lined in a stadium to an audience of 30,000 people and the show was televised live.
We were the most tired we’d ever been after the show, partly because of the altitude and partly from having been on the piss for 5 days, but being typical musos Paul, Wayne (bass) and me went out to a bar after the show rather than doing the sensible thing and going back to the hotel to sleep.

Longest tour for a while. Looking forward to getting out there and playing all over the UK?

We’ve done far longer tours than this in the USA and Europe but It’s hard to get weekday shows in the UK because so many venues have closed down which is a real shame because music used to be one of our biggest exports. People need a break from all the gloom and austerity so we’re hoping to liven things up with some much needed Punk Rock.
One of the good things about the UK is that though small it has a cornucopia of regional accents and we’re going to be exposed to a lot of them including Geordie and Brummie so I predict some communication problems as we have a Yorkshireman, a Welshman and Dutchman in the band.

Do you know Ricky from back in the old days? Looking forward to touring with him?

We knew each other vaguely via Girlschool when he was in The Almighty and we met up more recently when he was playing with Thin Lizzy. We’re really looking forward to sharing a stage with him, it’s going to be very noisy!

Are you doing a new album? What are you working on?

We’re compiling a live album and writing songs for our next studio album. We’re at the mixing stage for our Christmas EP.